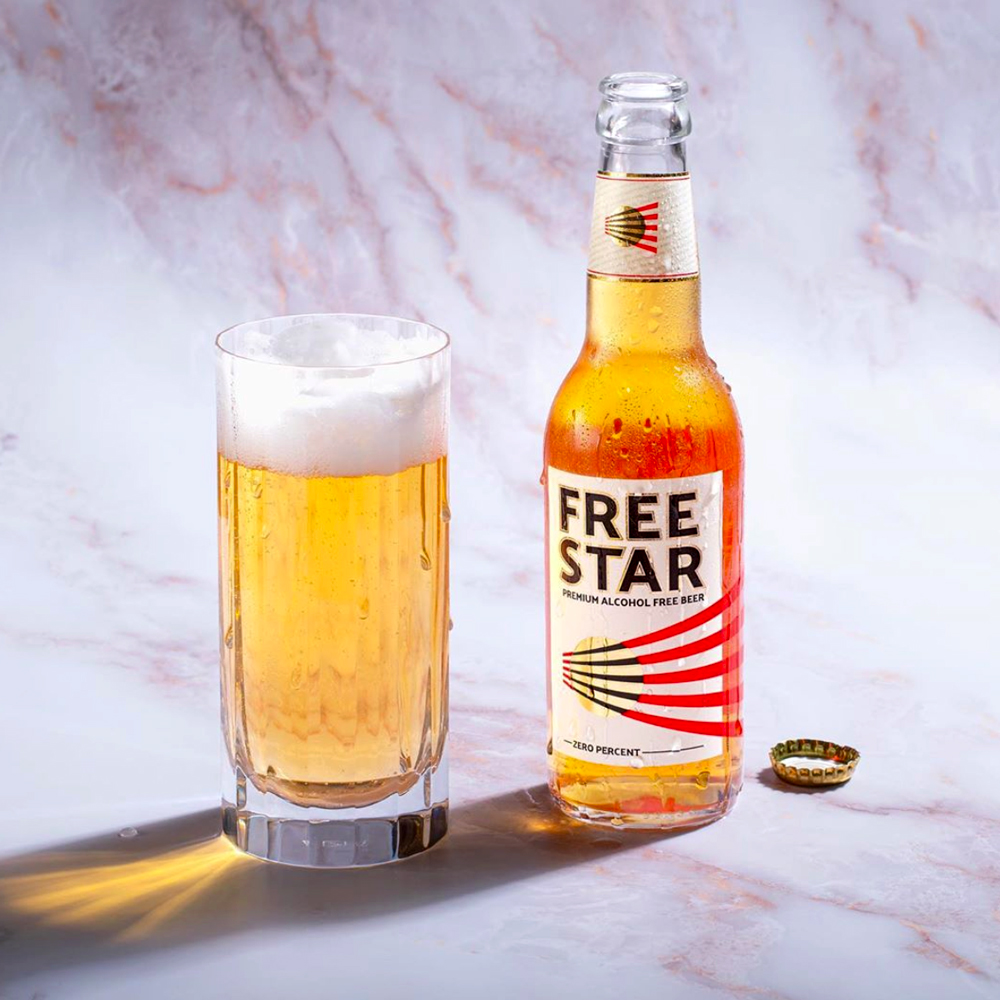 The Temperance Club review of: Freestar by Freestar Drinks

Freestar is a lager-style non-alcoholic beer by Freestar Drinks. The brands' goal was to create a sustainably manufactured drink whilst tweaking the idea of a non-alcoholic beer. This beer produces 70% less waste and uses 80% less water than other alcohol-free beers and unlike many non-alcoholic beers, it's not produced by removing alcohol from a full-strength beer. Instead, it's created using Perle hops, malted barley, citrus oils and other natural flavourings to give a distinct taste.

The beer has a distinct and powerful aroma. Quite sweet on the nose and not what you'd expect from a beer. The amber colouring and momentary head of the beer would, however, give you no indication it wasn't alcoholic. On the first sip, the strong aroma heavily influences the taste. The dominant aftertaste is of citrus which feels unnatural and somewhat manufactured. On a positive note, there is a lightness and refreshingness to be found in this beer and after getting accustomed to the flavour, there is a likeness to a European light lager. Freestar is specifically brewed so that no alcohol is produced in the process. We feel that the balance of the Perle hops, malted barley and natural flavourings are not quite singing in harmony to satisfy our palates.

As of July 2020, this was priced at £26.00 for 12 x 33cl bottles and of course, the canned options came in at even more value. An affordable price when bought direct.

It is a little difficult to compare this to any other beer or suggest what it's closest to. This could be considered an acquired taste, and maybe if tried at home it might be up your street. However, if you are looking for something closer to a conventional beer you might be best to look at other options. It is noticeably more like other beers that do not create alcohol in the production process.

Perfect for: Celiacs, vegans & the environment-conscious

Freestar prides itself on being more environmentally friendly in its process compared to other low or non-alcoholic beers. Being suitable for both vegans and celiacs makes this drink even more accessible too. Our suggestion is to cut through the artificial flavour is to keep Freestar well chilled and serve with a wedge of lemon.

Our opinion: Best for the lager adventurers

This isn't a conventional non-alcoholic beer. From the production all the way to its taste. But with the non-alcoholic beer market full of great options, this is unlikely to be someones first taste into the no-low beer world. It's probably more suited to those looking for a new lager drinking experience.